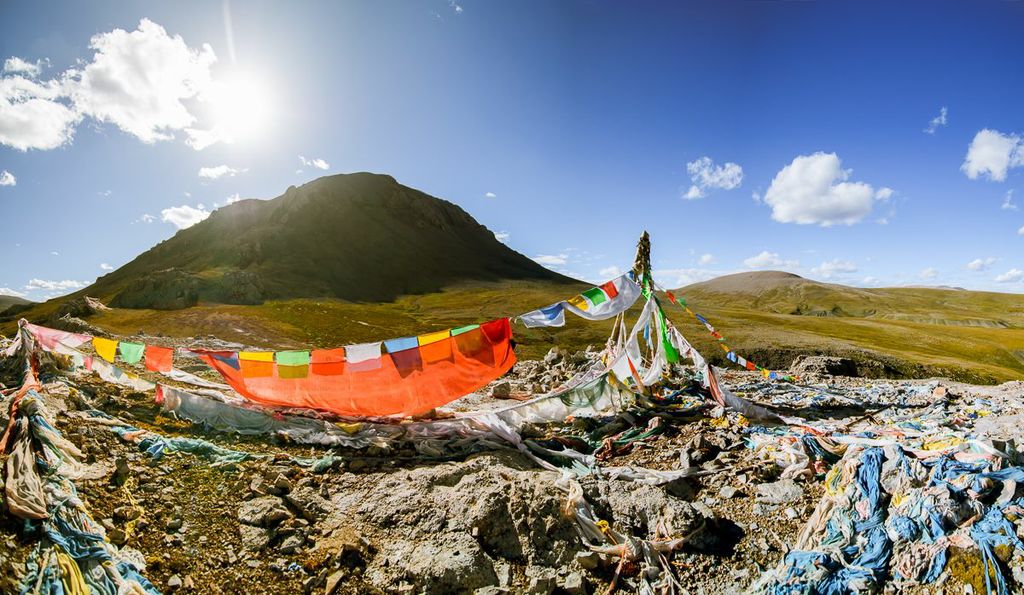 Lhasa to Everest Base Camp, Tibet

Tibet makes up about 25% of the land mass of China and covers an astounding 474,288 square miles. Characterized by its awe-inspiring alpine scenery, this region is famously known as the “Roof of the World” due to its average altitude at over 13,123 feet (4,000 meters). This is home to the Himalayas, the water supply for over 40% of the earth's population, and some of the world's greatest mountaineering feets. But you don't have to be a hard core mountaineer to enjoy the views of Mount Everest. In this trip you can drive right up to Everest Base Camp and see the full profile of the north face of the world's tallest mountain.

It is the exotic Tibetan Buddhist culture and its mysterious aura, however, that lures most tourists to travel in this stunning area year after year.

As the Tibetan Plateau is comprised of an average area that is larger than western Europe, it can be hard to know where to start when booking travel options to Tibet.  If you have only 9 or 10 days and you want to see the most iconic monasteries and mountains of Tibet, this 9 day tour from Lhasa to Everest Base Camp is a clear winner and will not leave you disappointed.

Our tour starts and finishes in Lhasa.  Lhasa (Chinese Name: 拉萨 (lā sà) is the capital and largest city in Tibet. Founded in the 5th century and largely closed to foreigners until the early 1980s, it is a holy Buddhist city dominated by the Potala Palace, and full of prayer wheels and prayer flags and Tibetan pilgrims who have come from 1,000’s of miles to worship at the “Mecca” of Tibet.

As the beautiful capital city of Tibet Autonomous Region (TAR), Lhasa is situated in the south central part of the region, on the north bank of the Kyichu River (a tributary of the Yarlung Zangbo River) in a valley surrounded by imposing mountains. The altitude of Lhasa is 3,656 meters (11,995 feet) above sea level.

Located at the bottom of a small basin surrounded by the Himalaya Mountains, Lhasa lies in the heart (both physically and spiritually) of the Tibetan Plateau with the surrounding mountains rising to 5,500 m (18,000 ft). The air here only contains 68% of the available oxygen one would find at sea level so be prepared to walk a little slower (and with heavier breath) and to pop a few Ibuprofen for the high altitude headache that you will probably have your first night in Lhasa.  Make sure you drink lots of water and try to stay away from coffee and alcohol your first few nights in Lhasa.  Also get lots of rest and take things slow on arrival here because you want to acclimatize slowly.

Lhasa is also home to the Potala Palace.  The Potala Palace (on the north side of Lhasa, Tibet) is the massive fortress-like building that is often depicted in the classic photographs of Lhasa. With over 1000 rooms and at 14 stories tall this is considered the essential building of Tibetan architecture. The palace is a massive white and brownish-red structure that casts an imposing shadow over the rest of the Lhasa and is held sacred in many Tibetan paintings, weavings, and sculptures in homes, monasteries, and restaurants all across the Tibetan Plateau.

Continuing the journey southwest from Shigatse city, our tour will take you to Mt. Everest National Nature Reserve. There, you can take in the panoramic view of the the world's top five highest mountains along the majestic Himalayan Range at Gawu La Pass. After this we will visit the highest monastery in the world, Rongbuk Monastery, and spend a terrific night at Everest Base Camp.  Base Camp is right at 5,200 meters (17,056 feet) and it affords impressive views of the entire Northeast ridge and summit of Mt. Everest. Everest itself sits at 8,848 meters (29,029 feet) and straddles the border between Nepal and China.  This camp is one of the two main approaches (the other one is in Nepal) where intrepid mountaineers start the climb up to the top of the world.

From Mount Everest base camp we will make our way back to Shigatse and Lhasa and then depart Lhasa.

Lhasa to Everest Base Camp

As you arrive in Lhasa. Our tour guide will meet you either at the train station or the airport to meet you and escort you to your hotel in your hotel. Depending on your arrival time, if you have a free time you can explore the Barkhor street around the Jokhang temple.

First in the morning, you will visit the Jokhang temple. The temple is considered as the holiest of all the Buddhist temples and Monasteries in the Inner Himalaya.  Founded in 7th Century by Tibetan Buddhist King Songtsen Gampo to house the Holiest statue of Lord Buddha. He brought this statue for as a dowry for his marriage  to Chinese Princess Wensheng who lived in the capital of China in Xi’an.  There will be thousands of pilgrims circumambulating, prostrating and visiting the Holy Temple as it this is the dream of every Tibet to make a pilgrimage to this site.

In the afternoon, You will visit Sera Monastery. The monastery is one of the three largest in Lhasa and central Tibet. It was founded by the main disciple of Je Tsongkhapa and the temple is about 600 Years old. The main highlight of the monastery visit is to watch 100’s of monks passionately debate Tibetan Buddhist Philosophy. The debating courtyard is open for visitors to observe from 3 pm every weekday. It is fun watch and photography, but inside the courtyard, photography is only allowed on mobile phones (normal cameras are prohibited in the courtyard to help protect the privacy of the monks during their religious ceremonies).

First thing in the morning, the group will visit the Potala palace. This is the most iconic building in Tibet.  With more than 1000 rooms this giant palace towers above Lhasa city.  The Potala Palace used to be the tallest building in the world before the industrial age and modern steel made building skyscrapers possible. The palace was first built in the seventh century by the King Songtsen Gampo. Later in the 17th century the fifth Dalai Lama rebuilt his residence over the ruins of the old palace. Ever since the palace has served as the winter residence for all the successive Dalai Lamas and as an Administrative center for the local Tibetan Government.

In the afternoon, the group will visit Drepung Monastery just outside of the Lhasa downtown area. It is one of the three biggest monasteries in Lhasa and central Tibet. Although today there are many larger monasteries, in the early 20th century, it was the world’s biggest monastic complex. The circuit around the monastery takes about an hour and presents spectacular views over Lhasa and towards the Kyichu River that runs through Lhasa.

Today, we will depart from Lhasa in the early morning to view the turquoise waters of Yamdrok lake, one of the most spectacular and holy lakes in Tibet.  Along our drive, we will stop first at the Yamdrok Lake.  From the lake you will see  the mighty snow-covered Mount Nojin Kangtsang (7191m) in the distance. After we depart Yamdrok Lake, we will stop for a late lunch and then  travel along the lake shore and drive up to the amazing Karo La Glacier before arriving at the town of Gyantse.

In Gyantse town, you will discover the Pelkhor Chode Monastery and the very famous Kumbum Stupa. It is the biggest Tibetan Buddhist Stupa in Tibet.  From Gyantse, you will drive across the Tibetan countryside to Shigatse.  Shigatse is the traditional seat of Panchen Lama, the second highest Lama in the Gelugpa sect of Tibetan Buddhism and also to the second largest city in traditional Tibet. In the city, you will visit the monastic complex of Tashi Lhunpo.

Sleep in a hotel in Shigatse

In Shigatse, you will visit the vast monastery of Tashi Lhunpo. The excellent pilgrimage route around the monastery takes about an hour and has fantastic views. The next destination after Shigatse is the small town of Shelkar, located in the Everest Region. Along the way to Shelkar, you will see more farming villages and beautiful high altitude landscapes. You will cross over the 5,248 meter Gyatso La Pass, which has excellent views of the Himalayas.  We will stay for a night in Shelkar.

Sleep in a hotel in Shelkar

Today we will be driving up to Mount Everest Basecamp,  and we will begin our drive as we ascend the 5,100 meter Geu La Pass. On bright days, this pass offers a stunning panoramic view of the Himalayas. You can see four 8,000 meter peaks from this pass including Cho Oyu, Makalu, Lhotse, and Everest. You will continue on to Rongbuk, the highest monastery in the world at just under 5,000 meters. Rongbuk Monastery has an unbelievable view of Everest and it is here that Everest really dominates the skyline! From Rongbuk, you will then go to Everest Base camp to stay the night while gazing out to the world’s highest peak.

Sleep in tent guesthouse at Everest Base Camp.

Due to the remoteness of the area, the guesthouse offers no showers and only offers very basic accommodations.

In the morning we will have an amazing chance to view and photograph the  sunrise over Mount Everest.  It is a breathtaking experience to watch the first rays of light make their way down and across the largest faces of the Himalayas and creep down into the Rongbuk Valley. After watching the sun fully light up the north face of  Mt Everest, we will start our return journey to the Shigaste. Along the way we will stop at some traditional farming villages. Upon arrival back to Shigaste we will have enough time to explore the main market street or hike the pilgrimage path at Tashi Lhunpo Monastery again.

Sleep in a hotel in Shigatse

Today we will travel back to Lhasa and the distance for the return journey is 280 kilometers, or about 6 hours of drive time. In the afternoon as we arrive in Lhasa, we will have one more chance to shop for souvenirs and walk the Barkhor pilgrimage circuit.

Sleep in a hotel in Lhasa

Your tour guide will escort you to the Lhasa train station or the Lhasa LXA airport as per you departure. We will offer one group shuttle to the airport and one group shuttle to the train station per group. If your train or flight time is not at a similar time with majority of your travel group, you can either take a taxi or Airport Bus to the airport.

Please enable cookies in your browser to place a booking

Please note: After your purchase is confirmed we will email you a confirmation.
Contact us